Crew at Randivåg are Sven Rundqvist and Lisa Köhler Rundqvist. We come from Gothenburg in Sweden and have both sailed since we were kids.

Sven has sailing and boating ”in the blood” from his mother’s family who were fishermen. The summers were spent on Styrsö in the archipelago of Gothenburg. In the Sea Scouts, he learned to sail: optimist, OK-dinghy, bohus dinghy and later on cruisers. He also learned safety, navigation and boat maintenance from the Sea Scouts. He studied navigation during the military service. 1977 he started to build a L32 – Svinga, it took five years to complete the yacht. During 1984-85 he sailed to the Caribbean and back. Lisa signed on as crew on the way back to Sweden.

Lisa, who lived  in Uppsala as a child, began to sail on Orust on the west coast during the summers. The first sailing boat in the family was a small dingy, a Gavotte, that was purchased in 1967. The next boat was a J14 - used extensively for several summers. It was a small yacht (apr 5 meters) but it was possible for two persons to sleep in it - if you moved every thing from inside to outside before bedtime. At that time the Swedish sailing forecast ended with a report from ”Borkum riff" (off the island of Borkum in Germany) and here the dream of cruising around the world  was born. The next yacht (a Misil 1) was much bigger – more than 7 meeters and four could sleep in comfort down below. Lisa studied navigation in Uppsala and she also worked as a navigation teacher and sailing instructor in Uppsala and Stockholm. The love for adventure took Lisa to the Caribbean as crew of a charter yacht where she met Sven in 1984.

From 1985 to 2000 we sailed Svinga every summer to the countries of Northern Europe. To Scotland, around Ireland, along the south coast of England, in Biscay, down to Northern France, to Holland, Germany, Denmark and Norway. Svinga was a safe and secure cruising boat, but thoughts of a bigger boat grew stronger. During this time, both of us was active as volunteers in the Swedish Cruising Association, Lisa mainly with education, in the the management team and as representative for Kryssarklubbens in NFB, the national boating education board. Sven was part of the Technical Committee.

1998  we started building our present yacht, an OverSeas 40  Randivåg (the name comes from a fishing boat in the family). We spent all our free time to work on the yacht, but we also had a boat builder and Arne Apelmans yard in Lysekil as help. We launched the yacht in 2004 and it was a special feeling to sail our own built boat for the first time! We sailed during the summers and continued with the building for a few years.

In 2010 the yacht was ready and we left Sweden for a longer cruise.

Our cruising have no geographical goal, the goal is to experience new countries, cutures, people, animals and nature. We want to see the world in our pace, without timetables. First a few years in Europe, and then out on the seven seas ... 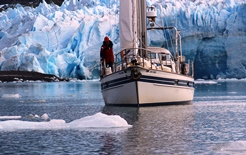 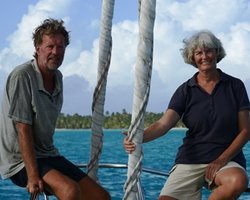 We (Lisa and Sven) are on a sailing adventure with our yacht Randivåg, an OverSeas 40. We started from Göteborg in Sweden in August 2010. The first winter we stayed in La Coruna and the spring 2011 we continued down the European coast to Gibraltar and Ceuta (in Africa). We sailed to Madeira and came to the Canary islands in September 2011. We visited almost all the Canary Islands and in January 2013 we continued our sailing - to Cape Verde and Brazil. After almost six months sailing down the Brazilian coast, we came to Uruguay and Argentina. Most of 2014 we stayed in Argentina and in November we continued down the Argentinian cost to Ushuaia. 2015 we sailed Chilean Patagonia to Puerto Montt. In January 2016 we continued our sail, first in Chile, then though the South Pasific to New Zeeland. 2017 started in New Zeeland, continued to Fiji, Vanuatu and New Caledonia and ended in Australia. 2018 started, in Sydney, sailed up the east coast of Australia. In July we checked out of Australia and in to Indonesia. We sailed through Indonesia to Malaysia where we checked in in early November. 2019 started in Langkawi, Malaysia, and later this year we visited Thailand and was back in Malaysia in late June.

Here you can see where we are.

You can also see where we have been by clicking the links below: